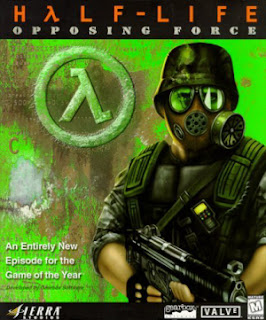 Half-Life: Opposing Force is the second expansion to the original Half-Life. Like Half-Life: Blue Shift it tells the same story from a different perspective, this time from the viewpoint of a US Marine sent in to deal with the incident.

The initial objective of the game is to go into Black Mesa and neutralise the entire facility after a scientific mishap opens up a portal to another dimension. This is an interesting perspective, as these same marines are enemies to both the protagonists of the other two games in the trilogy.

Shephard is isolated from the rest of his squad early in the game, and ends up having to work together with survivors in the Black Mesa Research Facility to escape the complex (which is a nice story item; considering he is initially on a mission to kill everyone in the complex and leave no trace of the event).

On his way through the complex he travels to the other dimension, Xen, and finds himself in the middle of a worldwide invasion. The alien Race X invade the complex through the open portal, and indiscriminately eliminate all human and Xen life forms they come across.

He discovers that black operations are planning to set off a tactical nuclear weapon in order to contain the invasion, by eliminating the entire complex. Shephard manages to defeat several black operations personnel and disarm the bomb before it goes off.

In the final boss fight Shephard defeats a gene worm, a massive alien creature which is facilitating the Race X invasion. However, after that success he is captured by the G-Man, who "detains" him for future analysis. Black Mesa goes up in smoke as the nuclear device from earlier is set off.

Half-Life: Opposing Force is a single player first person shooter. It uses the same game engine (GoldSrc) as the original Half-Life game, which in itself is an extension of the Quake game engine.

As with the other games in the "trilogy" (by this I refer to the three original games which tell the story of Half-Life from three different perspectives) there is consistent use of in-game cut scenes to give an almost cinematic feel to the game experience.

Some of the other features which make this game different from the original:
Survival in the game involves a combination of good aiming and dodging (generic first person shooter skills), conservation of ammunition, and puzzle solving. More than anything else the Half-Life games provide you the feeling of being inside a movie.

Very good story; I really liked getting different perspectives on the same event. It didn't become repetitive, the way they told the story meant it was a new experience each time which built up the gravitas of the story as a whole.

The gameplay was slick and enjoyable moment to moment. There was just the right amount of tension at times, and then areas where danger was temporarily lowered to give the player a moment to catch their breath.

For me; there were none. This was my favourite game, I even preferred it to the original Half-Life (I know, heresy!).

Crazy alien weapons, wasn't there an alien electric eel gun which could fire electric sparks? I loved the disorientation of travelling to the Xen dimension too. It was just the right amount of it; a fine line which I felt that Crysis tried to ride, but went too far.
Posted by Unknown at 19:19